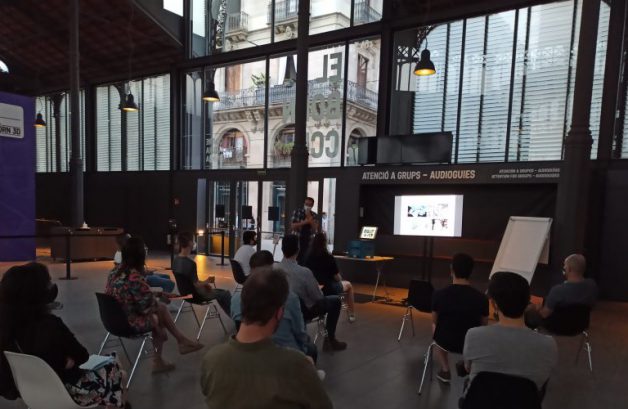 Two and a half years later, the second edition of Biennal Ciutat i Ciència is back. From June 8th to 13th, Barcelona hosted a new edition of this festival that seeks to bring science closer to citizens and invite them to be the protagonist.

With a program full of activities of all kinds (more than 250 activities and nearly 300 speakers from different branches of science) that took place all over the city, the CVC had two workshops in a privileged location, El Born Centre de Cultura i Memòria.

The CVC session, which was framed in La Nit de la Ciència, was called “Patrons biomètrics: saber l’edat amb intel-ligència artificial”. It was presented by the CVC researcher Jordi Gonzalez and organized by the CVC communication and marketing team, with the help of the Tech-Transfer Support Unit.

The session consisted of an introduction to the technology and how facial recognition occurs, as well as an explanation on how age prediction is performed based on biometric patterns and artificial intelligence. This was followed by a contest in which attendees, divided by groups, and the demo of the computer competed to figure out the age of photos of different characters. “The humans” won and were consequently awarded prizes. Therefore, one of the messages to be conveyed was exposed. Machines are not perfect, there is still a long way to go for the development of this technology and humans will always be necessary.

Following the contest, people who wanted to had the opportunity to test the demo and see if it could guess their own age.