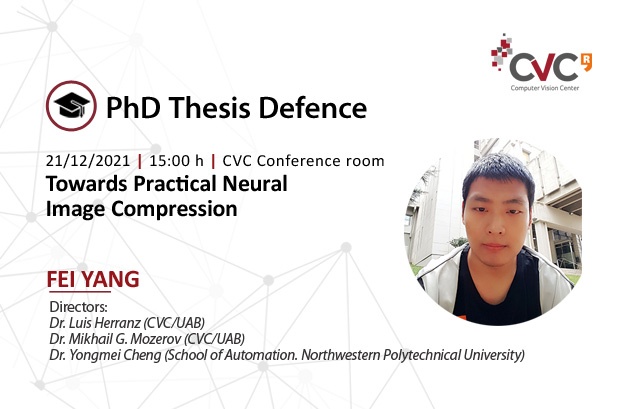 CVC has a new PhD on its record!

Images and videos are pervasive in our life and communication. With advances in smart and portable devices, high capacity communication networks and high definition cinema, image and video compression are more relevant than ever. Traditional block-based linear transform codecs such as JPEG, H.264/AVC or the recent H.266/VVC are carefully designed to meet not only the rate-distortion criteria, but also the practical requirements of applications.

Recently, a new paradigm based on deep neural networks (i.e., neural image/video compression) has become increasingly popular due to its ability to learn powerful nonlinear transforms and other coding tools directly from data instead of being crafted by humans, as was usual in previous coding formats. While achieving excellent rate-distortion performance, these approaches are still limited mostly to research environments due to heavy models and other practical limitations, such as being limited to function on a particular rate and due to high memory and computational cost. In this thesis, we study these practical limitations, and designing more practical neural image compression approaches.

After analyzing the differences between traditional and neural image compression, our first contribution is the modulated autoencoder (MAE), a framework that includes a mechanism to provide multiple rate-distortion options within a single model with comparable performance to independent models. In a second contribution, we propose the slimmable compressive autoencoder (SlimCAE), which in addition to variable rate, can optimize the complexity of the model and thus reduce significantly the memory and computational burden.

Modern generative models can learn custom image transformation directly from suitable datasets following encoder-decoder architectures, task known as image-to-image (I2I) translation. Building on our previous work, we study the problem of distributed I2I translation, where the latent representation is transmitted through a binary channel and decoded in a remote receiving side. We also propose a variant that can perform both translation and the usual autoencoding functionality.

Finally, we also consider neural video compression, where the autoencoder is typically augmented with temporal prediction via motion compensation. One of the main bottlenecks of that framework is the optical flow module that estimates the displacement to predict the next frame. Focusing on this module, we propose a method that improves the accuracy of the optical flow estimation and a simplified variant that reduces the computational cost.