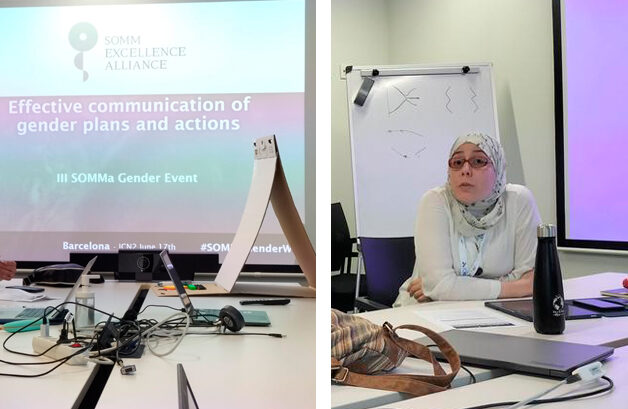 On June 17, Laura Martín Montañez and Asma Bensalah attended the III Event on Gender Equality of the SOMM alliance on behalf of the Computer Vision Center (CVC) Equality Commission. The event, an open debate on gender issues, took place at the Catalan Institute of Nanoscience and Nanotechnology (ICN2).

Asma Bensalah, PhD student and member of CVC's equality committee, moderated a discussion about mentoring in which programmes such as the Researchers Beyond Academia Mentoring Programme (REBECA) from the Spanish Foundation for Science and Technology (FECYT) or 'The Third Half' initiative of the Autonomous University of Barcelona were mentioned.

After the event, equality representatives from the Donostia International Physics Center (DIPC), the Galician Institute of High Energy Physics (IGFAE), the Institute of Mathematical Sciences (ICMAT), and the director of Diversiunity (Jakob Feldtfos Christensen, who delivered the speech in the plenary session) visited CVC's facilities guided by Laura Martín Montañez, CVC's Communications & Marketing Specialist and also a member of the equality committee.