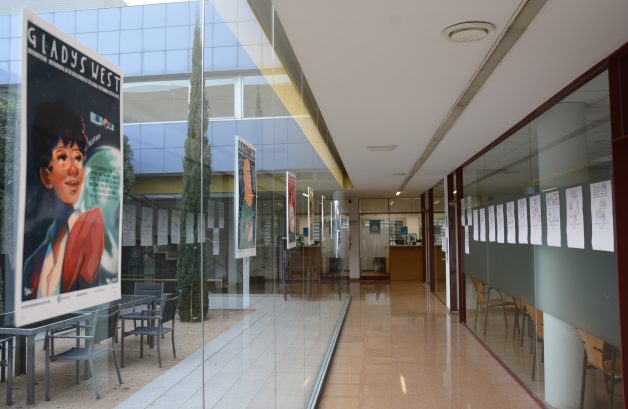 The Computer Vision Center (CVC) stepped up to celebrate the “Women and Girls in Science Day” on February 11, initiated by UNESCO as a distinguished day for the international science community since 2015. This day is dedicated towards recognizing the contributions of women scientists in the scientific and technological revolution.

Several fun and intellectual activities were organized by CVC for all its staff and research personnel. It all started with a co-creative mural asking how many women in science and technology they are aware about. Posters and infographics were exhibited, featuring women scientists from NASA, women in tech from the UN or other beautiful compendium of illustrations of diverse women in science. In addition, the situations of gender inequality in science were also under display, as the CVC joined the CREAF campaign (also a CERCA centre) “En ciencia también pasa” #insciencetoo.  The Javier Royo satirical cartoons were showcased at CVC corridors in order to illustrate some real stories of prejudices, impostor syndromes and mansplaining situations faced by women in research. In addition, we broadcasted our women researchers through some videos recorded in the last year in which they share experiences about their driving force towards research, advices for girls and views on gender discrimination. Finally, a table was presented in the dining hall with resources and games related to gender inequality, the recognition of women scientists and the featuring of role models in different domains of science and technology.

Other notable activities featured our researcher Aura Hernandez Sabaté in the exhibition of the UAB science library for the campaign #fetXdonaTIC #11F2022 of DonesCOEINF (Gender Commission of the College of Computer Engineering of Catalonia) and also presiding a talk session at the L’Escala l’Avet School. In addition, the inauguration of the Women@INF project was celebrated in which our researcher Alicia Fornés participated. The project aimed to “finger on the pulse” of  the situation of women in computer science research in Spain and promote STEM (Science, Technology, Engineering, Mathematics) vocations.

We would also like to mention CVC’s participation on February 8 in the Viquimarató organized by Parc de Recerca Biomèdica de Barcelona (PRBB) and Espai Viquidones of the Universitat Pompeu Fabra (UPF). CVC joined forces with 20 other scientific entities to create, edit or translate pages of women scientists in Wikipedia.

If you still want to come and visit us we will keep the exhibition open for some more weeks. Do not hesitate to ask us for resources. Sharing is living and more on occasions like this one!

These were some of the materials that were shared: